Fast-Forward to the end of GSoC - “Contribution Summary”

What part of the proposal is complete ?

Future Work to be done

As outlined in my proposal I’ll be working on the task of Object Detection which involves generating bounding boxes for the detected objects in an image. I’ve divided my entire timeline into three major phases which includes:

During this period I spent my time in setting up my developement environment on the server by installing Caffe Deep Learning framework, downloading the humongous ILSVRC-2012 dataset, reading up the research papers outlined in my proposal. Caffe is a great framework but what it lacks is documentation and tutorials for a beginner :(. Constrained to implement my project in C++, I had to go through the official API and figure out myself what’s happening under the hood. Luckily I had a bit of experience working on Google Protocol Buffers which is largely used in Caffe for defining various core classes. Having used Caffe throughout the summer, I dedicated a blog post to it. This pretty much sums up my Community Bonding Period.

In general Deep Learning models take up huge chunk of memory to hold the learnable parameters. But SqueezeNet is designed so as to reduce the number of parameters in the following ways:

This leads to a network with approx. 1.2 million (4.78MB size uncompressed network) parameters which is considerably less compared to other popular networks such as AlexNet, GoogleNet, ZFNet, VGGNet, ResNet all of which have orders of \(10s\) of millions of parameters. 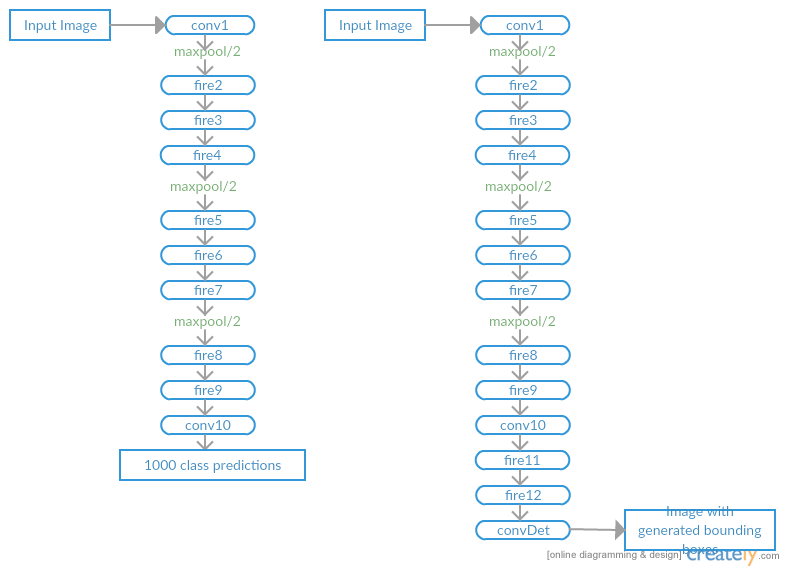 Now let’s come to the part of training SqueezeNet for Image Classification task. ImageNet is the biggest dataset of images out there of size nearly 1.2 TB ! ILSVRC (ImageNet Large Scale Visual Recognition Competition) is a collection of subset of images from ImageNet with nearly 1.2 million images (approx. 1k images per class). There were number of challenges that I faced while fine tuning the right set of hyperparameters to kick start the training. Let’s dive in. One key problem was with Dead ReLUs deeper in the network which continously output \(0\). This leads to the network to a never changing state. Catching this problem was pretty easy by analyzing the training loss as a function of number of iterations and analyzing the distributions of activation maps of Convolutional layers. Here are some of the visualizations during the training phase. 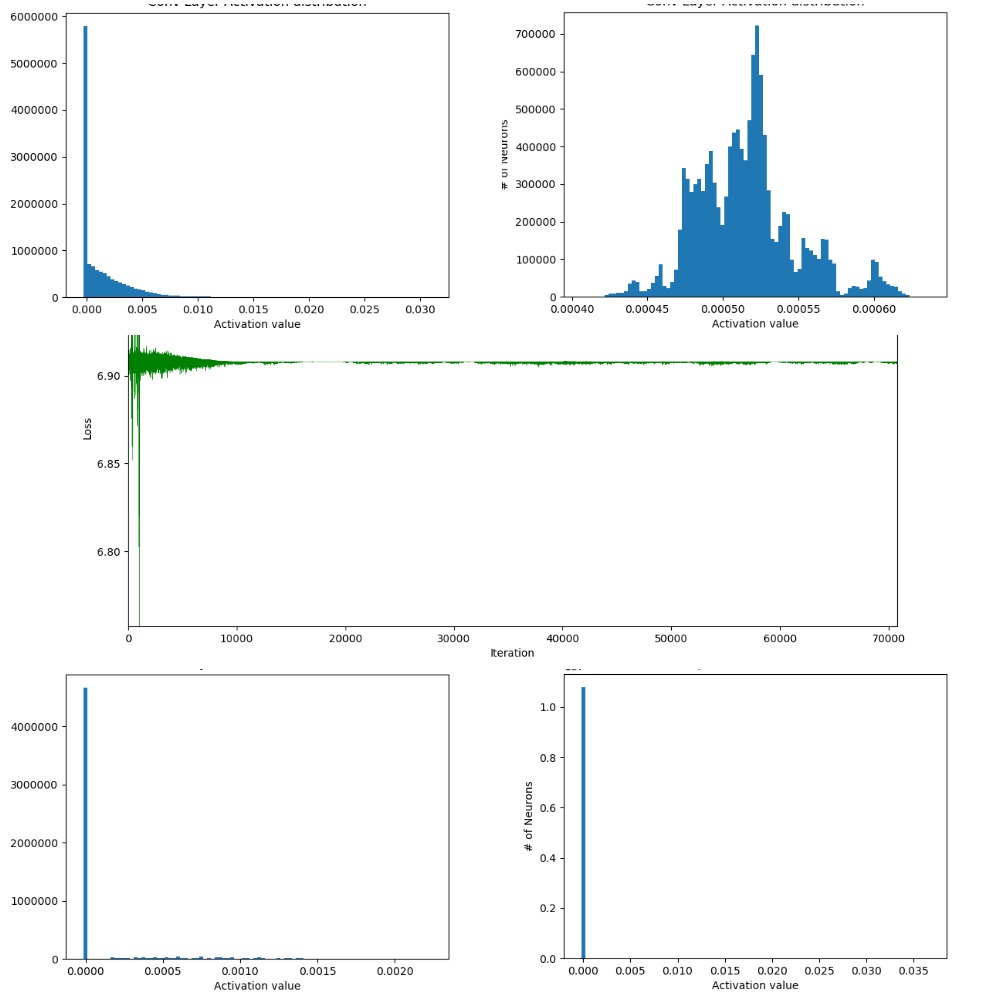 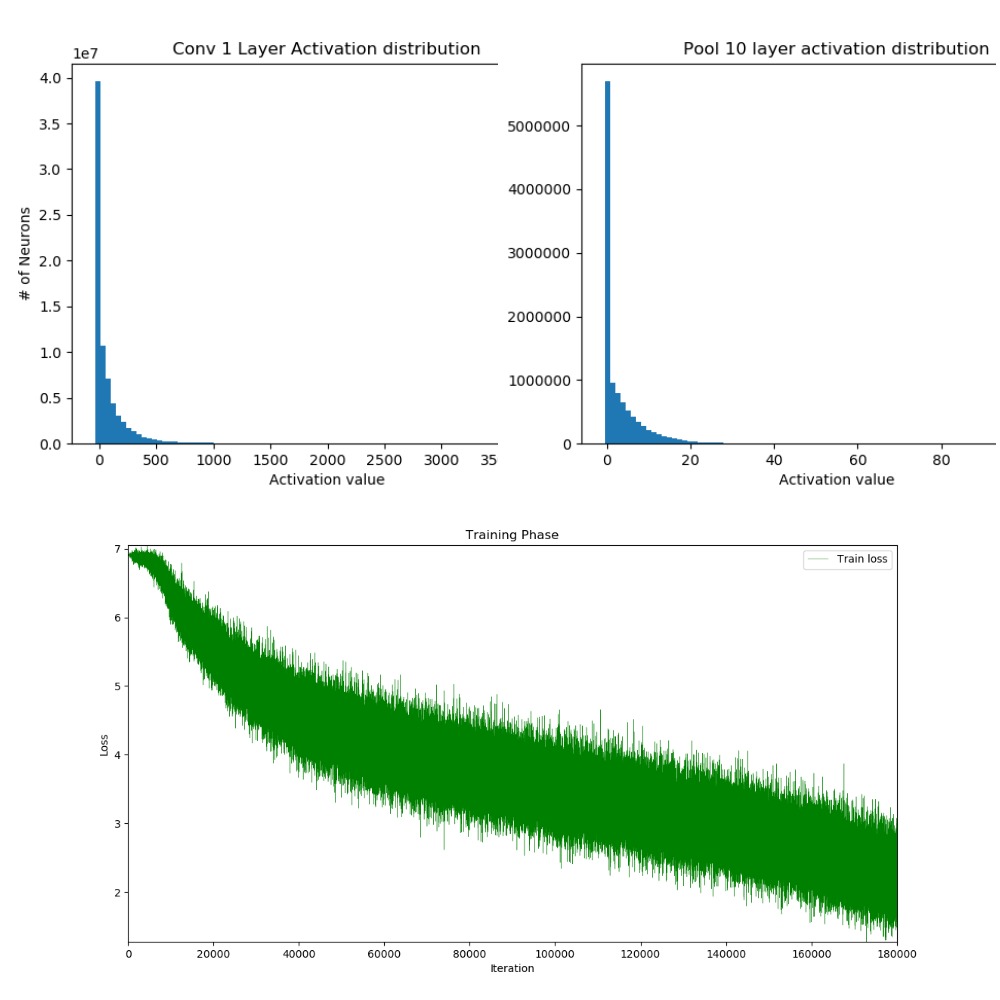 Fig 3: Training which did converge ! One can infer from the histogram distribution that the weights are distributed over good range of values.

So, why the problem with Dead ReLUs and how to get over it? There could be ample reasons. Bad weight initialization (You might want to have a look at this), high learning rate to pick a couple. The solution to this could be to use Leaky ReLU (should be experimented, worked in my case with \(\alpha = 0.001\)), try with smaller learning rate. Let’s dive into some math here. Mathematically,

Finally the weight update rule (without momentum and \(\alpha\) being learning rate) gives us:

This above weight update rule clearly indicates why the weights of Dead ReLUs never change and thus the constant loss \(vs\) iterations in Fig 2 above.

Rectifying the mistakes from previous trainings and re-training the model multiple number of times with different hyperparameters, it took nearly 10 days for the model to converge on an NVIDIA Tesla K20c GPU.

“Given a set of ground truth bounding box shape observations \({(w_{i}, h_{i})}\) find \(K\) anchors such that the sum of the distance (in the shape of \((width, height)\)) between each ground truth box to its nearest anchor is minimised.” And this can be effectively solved using \(K\)–\(means\)

Fig 5: Distribution of bounding box shapes of all objects in the PASCAL dataset (A total of \(40138\) bounding boxes. Means of \(K\) clusters are marked with red crosses. Images were reshaped to \(416 \times 416\) before clustering the anchors.

Loss function for object detection is given by:

This can be split into three major parts where the first part contains bounding box regression, the second part contains confidence score regression and the last part is just the cross entropy loss for classification.

During test time, for one feed forward, we have 4761 \(\left(W_{f}=23, H_{f}=23, K=9\right)\) bounding boxes which are predicted. Most of these boxes overlap for a single object. I applied Non-Maximal-Supression to get rid of these redundant bounding boxes clutter and select box(s) taking into consideration \(Pr(class_{c} \mid object) * Pr(object) * IOU_{pred}^{truth}\) and the extent to which these bounding boxes overlap with one another.

Let’s come to the part of training the model. With data split ratio of 3:1 for training and validation respectively and without data augmentation, the model didn’t generalise to new examples and there was lot of overfitting. 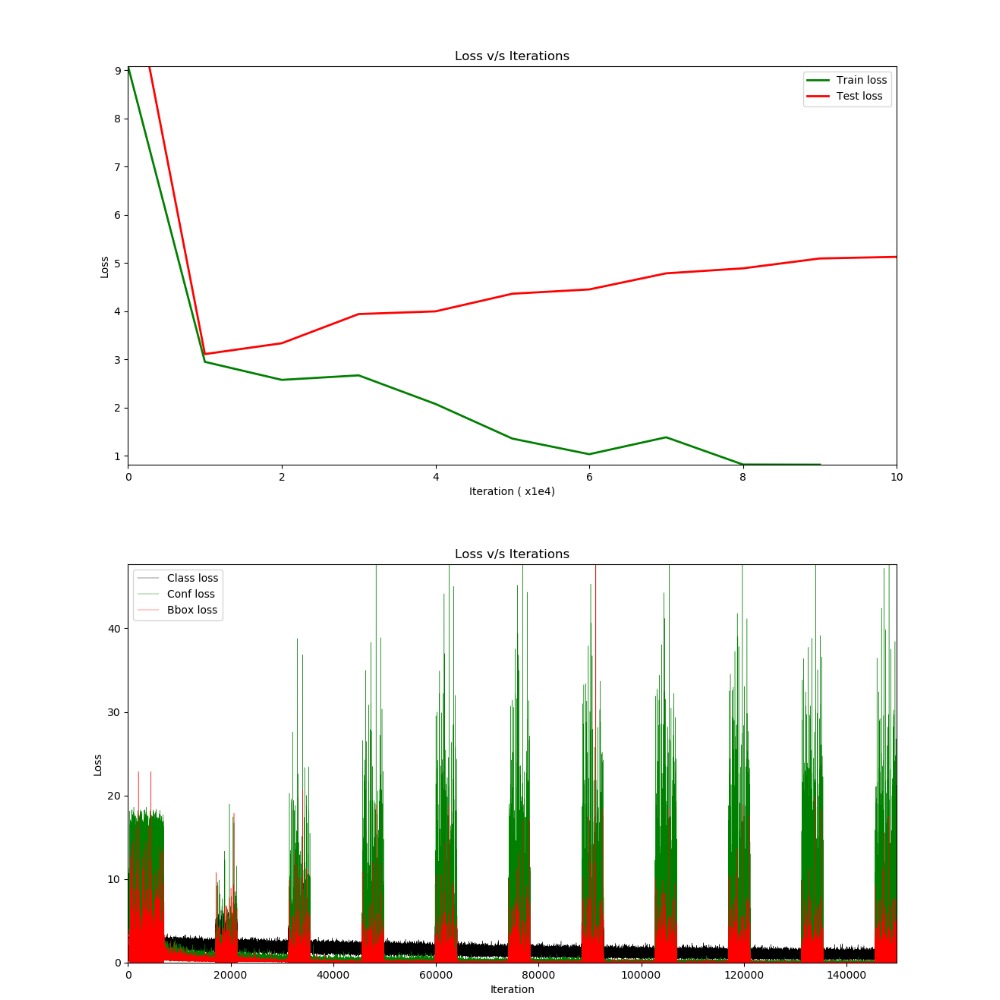 Fig 6: (Top) Training on PASCAL dataset which overfit the training data. (Bottom) Dissection of entire loss into confidence score, class regression and bbox regression. The spikes in between is the loss from validation dataset.

At this point analyzing the individual losses, it was clear that there were two major problems

And to address the problem with overfitting, I used Dropout layer along with offline data augmentation which involved flipping the image horizontally and vertically, rotating image by a value between \(-45^{o} \enspace and \enspace +45^{o}\), crop the image (top, left, bottom, right), Gaussian Blur, Average Blur, Gaussian Noise, Contrast Normalization.

Re-training the model with the new bag of tricks seemed to work !

Visualizations from SqueezeNet and SqueezeDet Models

Just for comparison, in Fig 7, on the left is AlexNet (obtained from caffe model zoo ):

and on the right is SqueezeNet model (trained as part of GSoC): 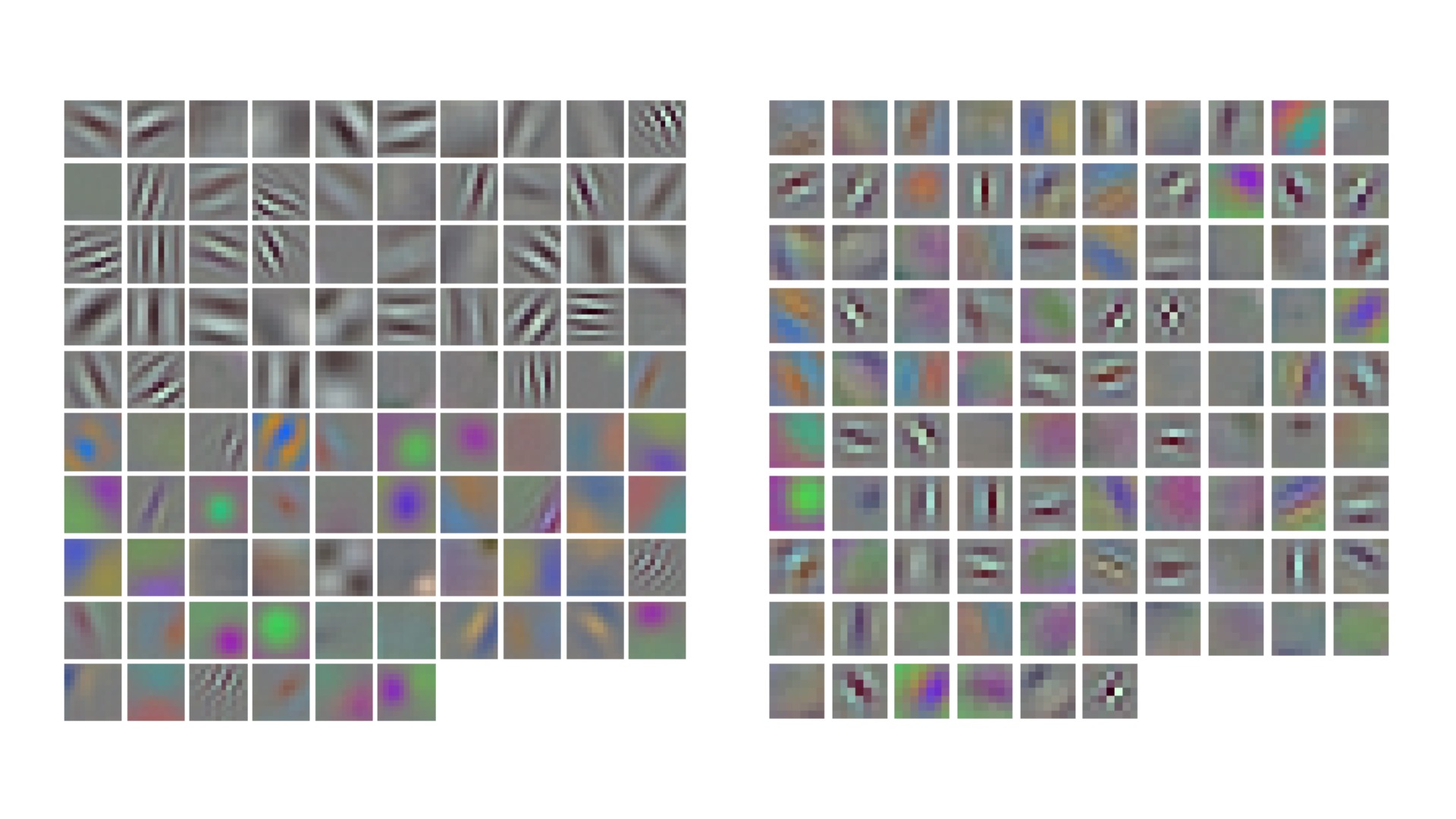 Fig 7: Visualization of learnable weights of the model. In total, there were 96 filters in the first Conv layer.

Why compress the network ?

Weights in the network whose magnitude is relatively small do not contribute a lot to the loss and thus during backprop, these weights do not get updated to such an extent that they make significant contribution to the loss. Large Neural Networks constitute of many such redundant weights. To get a feel of this, Fig. 8 shows the weight distribution of last layer of SqueezeNet model (left) and AlexNet (right) trained on ImageNet. Getting rid of such redundant weights in one way reduces the size of the model. There are many methods which accomplish this task. There is a trade off between the accuracy and the extent to which we remove such weights. 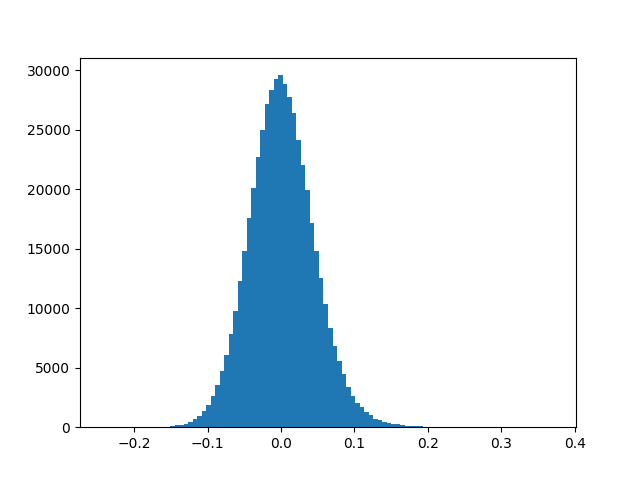 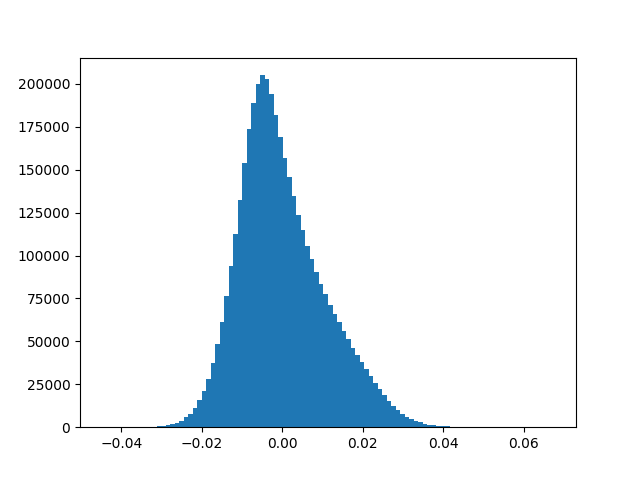 Steps 2 and 3 can be performed iteratively to reduce the number of weights even further.

Here are some of the results from the task of Object Detection.

I’m exaggerating here. Hmmmm….. I myself couldn’t recognize that there was a person out there on the deck !

Or, having your own custom dataset and would like to train your models ? Yes, even that’s possible. Just head over to caffe and start brewing !

As a last note,

Participating in Google Summer of Code has brought me closer to the group of amazing developers and OpenCV community. I look forward to contribute to OpenCV for years to come, and I couldn’t be more satisfied with the experience.