This post is part of the code that I released on github written in Tensorflow. This post summarizes on the problem of modelling a given data distribution using Variational Autoencoders (VAEs) and Generative Adversarial Networks (GANs) and comparing the performance of these models. One might ask, why generate images from a given data distribution when we already have millions of images around ? As pointed out by Ian Goodfellow in the NIPS tutorial, there are many applications indeed. One which I found very interesting was the use of GANs (once we have perfected them) in simulating possible futures for an agent using Reinforcement Learning

Mathematically, let \(X\) be the input to the encoder, \(z\) be the latent vector and \(X^\prime\) be the output of decoder which has the same dimensions as of \(X\).

Visually VAE can be thought of as shown in Fig 1.

Fig 1: Architectural View of VAE (or say a typical Autoencoder)

whereas in case of Variational Autoencoders, we expect the latent vector to follow a certain distribution, usually (unit Gaussian distribution) and this results in the optimization of following loss,

With the additional term in the loss function, there is trade-off between how good the model generates images and how close the distribution of latent vector is to an unit gaussian distribution. These two components can be controlled by two hyperparameters say \(\lambda_1 \thinspace and \thinspace \lambda_2\).

GANs are yet another way of generating data from a given prior distribution. These consist of training two parts simultaneously i.e, the Discriminator and Generator.

Discriminator is used to classify whether an image is “real” or “fake” and on the other hand, Generator, as the name suggests, generates images from random noise (often called latent vector or code and this noise is typically drawn from either uniform distribution or Gaussian distribution). The task of the generator is to generate such images so that the discriminator is unable to distinguish the “real” images from “fake” images. As it turns out, the Generator and the Discriminator are in contradiction with one another. Discriminator tries real hard to distinguish real and fake images and at the same time, Generator tries to produce images that look more and more real which forces the Discriminator to classify these images as “real”.

Typical structure of a GAN looks as shown in Fig 2 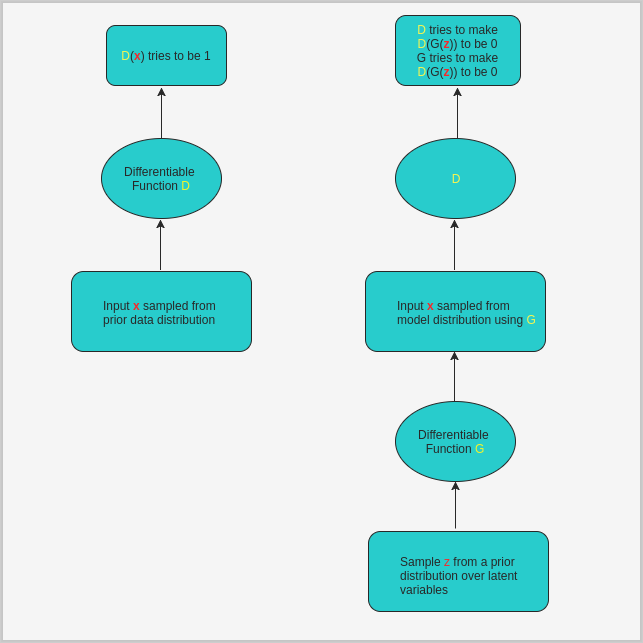 Generator consists of deconvolution layers (transpose of convolutional layers) which produce images from code. Fig 3 describes the architecture of the network.

Fig 3: Generator of a typical GAN (Image taken from OpenAI)

There are number of challenges in training plain GANs, one of the significant one that I found is, the sampling of the latent vector/code. This code is merely a noise sampled from prior distribution over latent variables. There have been methods to overcome this challenge. These methods include the use of an VAE which encodes the latent variables and learns the prior distribution of the data that is to be generated. This sounds much better because the Encoder is able to learn the distribution of the data and now we can sample from this distribution rather than generating random noise.

Discriminator here is just concerned with classifying whether an image is real or fake and no attention is paid to whether the image contains actual objects or not. This is evident when we examine the images generated by GAN on CIFAR (see below).

We can redefine the discriminator loss objective to include labels. This has proven to improve the subjective sample quality.
eg : on MNIST or CIFAR-10 (both having 10 classes each)

Implementation of the above losses in python and tensorflow is as follows:

I trained a VAE on MNIST. The code of which can be found here. MNIST consists of binary 28 \(\times\)28 images.

Below is the gif of the images generated from GAN as a function of number of epochs. (The model was trained for 368 epochs)

Clearly, images generated from VAE are kind of blurry compared to the ones generated from GAN which are much sharp. Well, this shouldn’t come as a surprise and the result is expected. This is because, of all the possible outcomes VAE model generates from the distribution, it averages them. To reduce the bluriness in the images, \(L1\) loss can be employed instead of \(L2\) loss.